By default, you will get some platform alerts. This may benefit you, by giving you improved "situational awareness". Please decide if these alerts are of interest to you or not. Feel free to silence them, as the Compliant Kubernetes administrator will take responsibility for them.

Your focus should be on user alerts or application-level alerts, i.e., alerts under the control and responsibility of the Compliant Kubernetes user. We will focus on user alerts in this document.

Many regulations require you to have an incident management process. Alerts help you discover abnormal application behavior that need attention. This maps to ISO 27001 – Annex A.16: Information Security Incident Management.

User alerts are configured via the Secret alertmanager-alertmanager located in the alertmanager namespace. This configuration file is specified here.

Make sure to configure and test a receiver for you alerts, e.g., Slack or OpsGenie.

If you get an access denied error, check with your Compliant Kubernetes administrator.

If you want to access AlertManager, for example to confirm that its configuration was picked up correctly, or to configure silences, proceed as follows:

Then create a PrometheusRule following the examples below or the upstream documentation with an expression that evaluates to the condition to alert on. Prometheus will pick them up, evaluate them, and then send notifications to AlertManager.

In Compliant Kubernetes the Prometheus Operator in the workload cluster is configured to pick up all PrometheusRules, regardless in which namespace they are or which labels they have.

The user demo already includes a PrometheusRule, to configure an alert:

The screenshot below gives an example of the application alert, as seen in AlertManager. 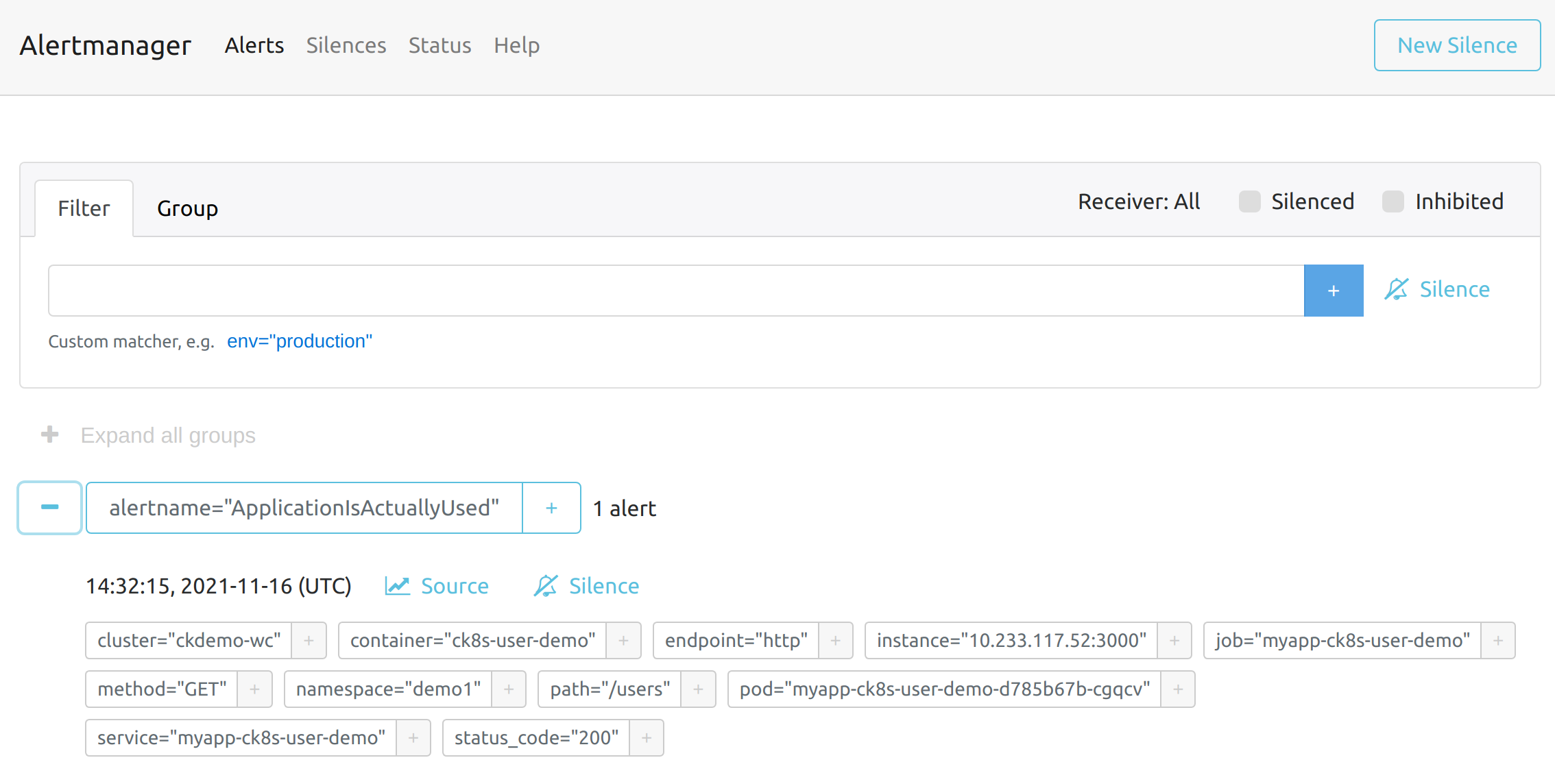 PrometheusRules have two features, either the rules alerts based on expression, or the rules records based on a expression. The former is the way to create alerting rules and the latter is a way to precompute complex queries that will be stored as separate metrics:

For alert rules labels and annotations can be added or overridden that will become present in the resulting alert notifications, in addition the annotations support Go Templating allowing access to the evaluated value via the $value variable and all labels from the expression using the $labels variable.

For recording rules labels can be added or overridden that will become present in the resulting metric.