This guide gives an introduction to Prometheus and Grafana and where they fit in Compliant Kubernetes, in terms of reducing the compliance burden.

Prometheus is an open-source solution for monitoring and alerting. It works by collecting and processing metrics from the various services in the cluster. It is widely used, stable, and a CNCF member. It is relatively easy to write ServiceMonitors for any custom services to get monitoring data from them into Prometheus.

Grafana is the most widely used technology for visualization of metrics and analytics. It supports a multitude of data sources and it is easy to create custom dashboards. Grafana is created by Grafana Labs, a CNCF Silver Member.

The requirements to comply with ISO 27001 are stated in ISO 27001:2013 The annexes that mostly concerns monitoring and alerting are Annex 12, article A.12.1.3 "capacity management", and Annex 16 which deals with incident management.

Article A.12.1.3 states that "The use of resources must be monitored, tuned and projections made of future capacity requirements to ensure the required system performance to meet the business objectives."

The article goes on to say that "Capacity management also needs to be: Pro-active – for example, using capacity considerations as part of change management; Re-active – e.g. triggers and alerts for when capacity usage is reaching a critical point so that timely increases, temporary or permanent can be made."

Annex A.16.1 is about management of information security incidents, events and weaknesses. The objective in this Annex A area is to ensure a consistent and effective approach to the lifecycle of incidents, events and weaknesses. Incidents needs to be tracked, reported, and lessons learned from them to improve processes and reduce the possibility of similar incidents occurring in the future.

Prometheus and Grafana can help with this by making it easier to:

Prometheus and Grafana in Compliant Kubernetes¶

If you want to access the web interface of Prometheus, proceed as follows: 1. Type: kubectl proxy 2. Open this link in your browser

The Prometheus UI is only available by default starting in Compliant Kubernetes version 0.26.

Grafana can be accessed at the endpoint provided by the Compliant Kubernetes install scripts. If you have configured dex you can login with a connected account.

Compliant Kubernetes deploys Grafana with a selection of dashboards by default. Dashboards are accessed by clicking the Dashboard icon (four squares) at the lefthand side of the Grafana window and selecting Browse. Some examples of useful dashboards are listed below.

The Nodes dashboard (Node Exporter / Nodes) gives a quick overview of the status (health) of a node in the cluster. By selecting an instance in the "instance" dropdown metrics for CPU, Load, Memory, Disk and Network I/O is showed for that node. The time frame can be changed either by using the time dropdown or selecting directly in the graphs.

The Pods dashboard (Kubernetes/Compute resources/Pods) gives a quick overview of the status (health) of a pod in the cluster. By selecting a pod in the "pod" dropdown metrics for CPU, Memory, and Network I/O is showed for that node. The time frame can be changed either by using the time dropdown or selecting directly in the graphs.

Configuring Prometheus to collect metrics from an application requires either a ServiceMonitor or a PodMonitor, targeting a Kubernetes Service or Pod respectively. They are both described upstream in the API reference for Prometheus Operator. In general ServiceMonitors are recommended over PodMonitors, and it is the most common way to configure metrics collection.

In Compliant Kubernetes the Prometheus Operator in the workload cluster is configured to pick up all ServiceMonitors and PodMonitors, regardless in which namespace they are or which labels they have.

The user demo already includes a ServiceMonitor, as required for Compliant Kubernetes to collect metrics from its /metrics endpoint:

The screenshot below shows Grafana in "Explore" mode (the compass icon to the left) featuring the query rate(http_request_duration_seconds_count[1m]). It shows the request rate for the user demo application for each path and status code. As can be seen in the graph, the /users endpoint is getting more traffic than the other endpoints. 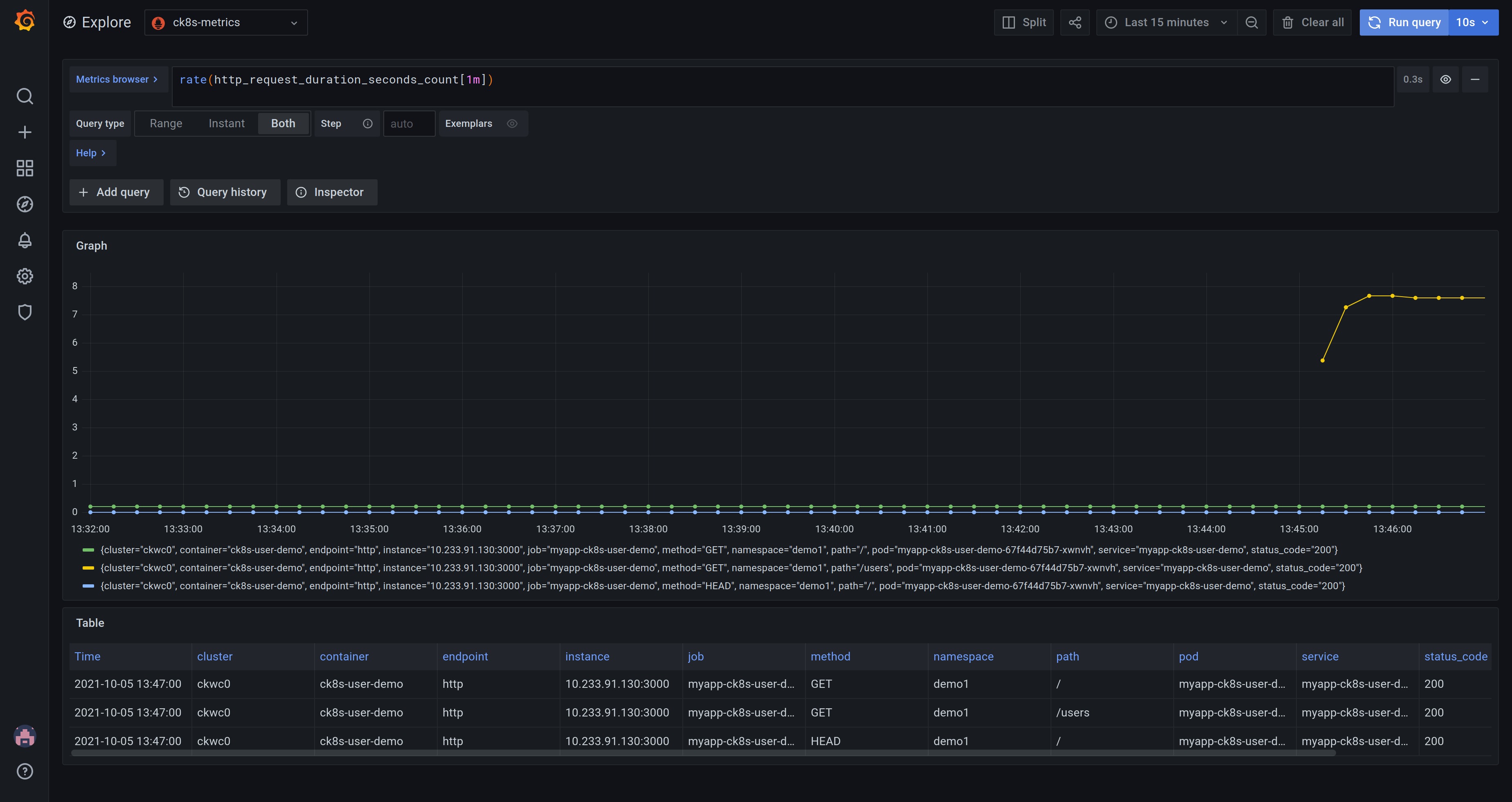 The "Explore" mode is great for developing queries and exploring the data set. If you want to save a query so you can refer back to it, you can create a Dashboard instead. Dashboards consist of multiple Panels, each of which, can display the results of running queries. Learn more about Grafana panels.

You may want to save frequently used Dashboards. Compliant Kubernetes saves and backs these up for you.

Monitors can be expanded further down to list and inspect its targets, within each one the "Discovered Labels" column will list information about the object in Kubernetes and in the "Target Labels" it will show the labels recorded from the target.

If the "Target Labels" is "Dropped" for a target then it means that it has been excluded from scraping since it doesn't match the monitor. There are three key things to check to make sure a target is properly picked up by a monitor:

The same concept applies to PodMonitors and Pods.

Then when the targets are active it is possible to see scrape information by navigating to "Status" > "Targets". Here Prometheus gives information about the time, status, and duration for scrapes.

For more information please refer to the official Prometheus and Grafana documentation.